EASTER — The celebration of the courage to live 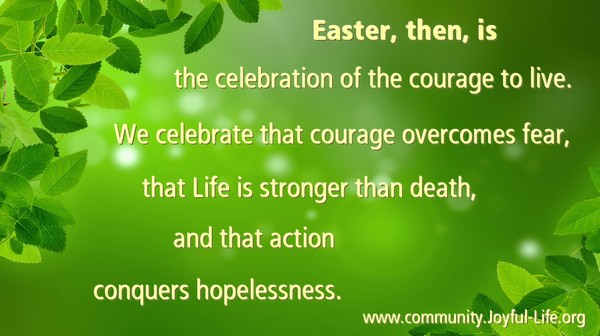 EASTER — The celebration of the courage to live

How can a person find their way in the midst of a world of lies, in systems of violence, injustice and abuse of power? How does one keep one's courage despite the cynicism of the powerful? How does one keep one's love for people in the face of the seducibility and manipulation of the masses, in the face of unbearable brutality, arbitrary cruelty, destruction of nature and hatred? Where does one get one's confidence in the face of the certain death sentence pronounced by authorities, power-hungry psychopaths and political puppeteers?
Jesus always answered such questions by freeing people from their restlessness, insecurity and distraction, giving them a point of view and new perspective outside of fear.

But in this course one does not remain human, for one loses humanity and forces it out of the young people one teaches to hate and kill.

But blessed are those who bring salvation to others, who make peace, who remain non-violent in the face of violence; they are called sons and daughters of God, sons of men and daughters of men = human beings. (Mt 5:9)

Where attempts are made to isolate man, to deprive him of life through death, the curtain in the temple that tried to separate man from God is torn, the graves are opened, and despair becomes hope, courage becomes reality, death becomes manifold life.

What we celebrate with the resurrection at Easter is also the resurrection, the immortality of humanity. It is a physical law that nothing is lost, no energy disappears. Nature demonstrates it to us all the time, and now in spring we see and feel it clearly, if only we go out and open our eyes to see how we can overcome the glorification of violence and hatred in the media, and can overcome finally war and violence.

What man is in truth cannot be killed.

Easter, then, is the celebration of the courage to live.

We celebrate that courage overcomes fear,

that Life is stronger than death,

and that action conquers hopelessness.

More in this category: « Destruction Release of the Joyful-Life Community »
back to top
We use cookies to ensure that we give you the best experience on our website.
I accept